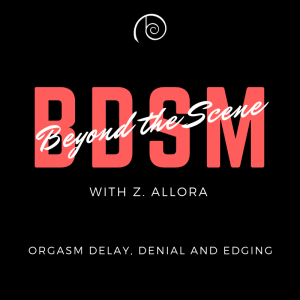 What’s the allure of NOT coming?
Ever go on a diet? All of a sudden, you are craving everything you shouldn’t have. For many, the concept works the same way with orgasm denial. If you’re told not to come, all you want to do is come. Some subs become consumed with the idea. Their entire world can shrink down to not doing exactly what they want to do. It also might get some into subspace quicker.

Why do it?
*Gift
Your orgasm is something you can give to your Dom(s).

*Mind Fuck
It’s a predicament: the sub is gagging to orgasm but doesn’t because they want to follow the Dom’s instructions, to willingly make the sacrifice. The choice to participate in denial is done of the sub’s free will (during negotiations) and it can cause much suffering, which can feed a masochistic need to give until it hurts.

*Part of Play
Games of control are easily played in this arena, and usually no equipment is involved. The intensity and level can be easy to extreme. Be mindful of what you are agreeing to, and always remember your safeword is there to save you from things beyond your limit.

*Pleasure
When it finally comes, the resulting orgasm can be intense and mind-blowing. Although, depending on the sub, it might be weak and unsatisfying, especially if their mind didn’t adjust to the idea it was okay to orgasm. Their body came, but their head couldn’t experience it as pleasure, making it more of a ruined orgasm. Or, in a sadistic relationship, it would be easy to ruin that orgasm by removing stimulation so all the buildup results in crossed messages and the sub’s body doesn’t process the pleasure.

*Lots of other reasons
As usual, this is not an exhaustive list. The reasons to participate can vary, might be a combination of facts, and can change over time.

Edging
The sub is denied permission to come but either stimulates themselves or their Master(s) do. The object of edging is to get to the razor’s edge of orgasm and then pull back. Stepping back from the pleasure can be extremely difficult, especially when everything in the sub’s body wants to orgasm. Edging can easily be used in sub assignments or control games.

Some subs can transfer their ecstasy from the craving an orgasm to not having an actual release. The following of instructions and pleasing their Master(s) supersede their transitory moment of physical bliss.

Orgasm Delay
Depending on the sub’s negotiated limits, this is a scene that can last for minutes, hours, or days and then possibly end in orgasm.

Orgasm Denial
This is more often days or weeks… and in some cases, months. (Of course, there are the stories of denial lasting years and ever forever… but those would be rather rare.)

Chastity Belts
There’s a variety of devices out in the world to help prevent orgasm.

If you use chastity devices, please make sure you have a plan to deal with hygienic issues. Not having access to your body can lead to major health risks. You must read and study so you aren’t harmed.

You have to know and trust your keyholder. Have an extra key (or six) in case of accidents and medical emergencies. (I hear the gasps and the murmuring that having a key defeats the purpose… I will always land on the side of safety.)

All this being said, accidental and on purpose orgasms can happen while in chastity. One only has to look on the Internet to see subs outsmarting chastity belts with vibrators, penetration, or various other techniques. If the sub is asked to edge they can slip over without meaning to do so. Some Masters will milk the prostate of male subs, which is a way of releasing the buildup of fluid but gives little or no pleasure. Female subs may be a bit more of a challenge. As a number of my readers and myself can attest, they may struggle with hands-free orgasms.

Remember, limits are opportunities for the Dom to become more creative.

This is one of the reasons I call myself a broken loveslave. As intriguing as orgasm delay/denial appears, this is a hard limit of mine after a rather terrible experience. If a scene involves sex, fuck anyone who thinks I shouldn’t be allowed to orgasm. Sexual assault plays a part in my damage, but when you are speaking to other subs, don’t make assumptions that the answer is simply they should just try harder to be more submissive. The baggage they are saddled with may have nothing to do with submission.

The other side of orgasm denial is forced orgasm. In Lock and Key, the Master does a forced orgasm scene where he takes the sub well beyond his endurance for pleasure.

But since this blog is about orgasm denial, I wanted to share an orgasm denial scene in Lock and Key. Zack is a sub who has loved Andrew (Master Drew) for years. This scene takes place during the weekend Andrew has won Zack in the audition for Are you Dom enough to be a sub? (This is the last scene during that weekend.)

Please enjoy the excerpt from Lock and Key:

Time ceased to have meaning.

“Oh God!” Fuck! Why had he chosen to explore orgasm denial? He could have picked anything else. But no, this insane, desperate hell was his own damned creation. He loved the feeling of dying to orgasm… as he had for hours… days… forever.

Even during his rest periods, he was tormented with dreams when he escaped into sleep. Visions of being collared by Master Drew, being fucked on stage at Entwined for all to see, and hot vanilla sex, dipped in love, filled his head.

Sometime in the middle of the night—or was it day, impossible to tell with Drew’s blackout curtains—a friendly hand teased Zack. The quiet manipulation left him breathless and panting but without satisfaction.

He shuddered, frantic for relief. His Master had dragged him to the precipice where each stroke made him dance maddeningly close to giving up and letting go.

His Master’s knowledge of his body was once again used against him as the fist tightened and set up a rhythm to bring him off.

Shit! God, why did Master Drew have to stroke him perfectly? The speed increased by a fraction.

Fuck! Zack might have been tempted not to confess the orgasm he edged. All he needed to do was remain silent, and he could so easily slip over into the bliss that beckoned him. But deep inside, even more than the transcendent feeling of orgasm, it was vitally important to him to be Drew’s perfect sub. That accomplishment meant more to him than any release.

Fuck! He tightened his grip on the damp sheets. When the weekend ended, Zack wanted to be the one Drew would regret never having again. He choked out the words through a groan. “Close. Um, oh so close.” The delicious pressure vanished, leaving his cock to pulsate in the cool air. Was this the eighth time or eightieth? Zack had lost track of the number of orgasms he hadn’t been allowed to have.

“Such a good pet,” Master Drew purred to him as he traced his hands down Zack’s quivering body.

He tried to speak, but only a whimper came out.

His Master licked the palm of his hand and traced wetness over the length of Zack’s cock. When he reached the tip, he pressed the shaft down, stretching Zack’s cock toward his thighs. The turgid member held there, pointing at his toes for a moment before Master Drew released the staff and allowed the length to snap up, slapping Zack in the lower belly.

“Oh.” Zack breathed out a groan at the tingling. He was in the zone. Every sensation his Master gave him became a precious gift he wanted to savor.

His Master danced his fingers along Zack’s body to stroke his face. Drew pressed a soft kiss on Zack’s lips, which made his heart sing. “You love this, don’t you, pet?”

Master Drew wrapped his hand around Zack’s cock and pulled upward on the shaft. “Can you answer me, pet?”

Oh fuck! He did adore the overwhelming feeling and unidentified emotions. Totally focused on his body, finding words to answer the question proved difficult. He wanted to suffer for Drew and prove himself worthy of being Drew’s.

Master Drew tipped a bottle of oil over his cock.

Zack held his breath as the line of lubricant hit his oversensitive flesh, making him keen with tormented pleasure as the liquid slid down his shaft. The sensation was almost enough to make him come, and then Master Drew massaged the oil all over to force Zack even closer to the edge.

His cock dripped with the glistening substance.

BUY LINKS for Lock and Key:

Always seek your own truth.

I’d love to hear from you so comment here or use the contact information to touch base with me privately.

BIO: Z. Allora believes in happily ever after for everyone. She met her own true love through the personals and has traveled to over thirty countries with him. She’s lived in Singapore, Israel and China. Now back home to the USA she’s an active member of PFLAG and a strong supporter of those on the rainbow in her community. She wants to promote understanding and acceptance through her actions and words. Writing rainbow romance allows her the opportunity to open hearts and change minds.

Dreamspinner Press is a small publisher devoted to extraordinary LGBTQ fiction, the authors who write it, and the readers who love it. Our three imprints satisfy the diverse needs of the most discerning reader. Dreamspinner Press publishes gay romance in all genres from sweet to erotic, suspenseful to fantastic. Harmony Ink Press features the best in YA, Teen, and New Adult LGBTQ+ fiction. DSP Publications features genre fiction with strong LGBTQ characters. Looking for cunning detectives or space pirates? This is where you'll find them. Our titles are available in print, digital, audio, and eleven languages. We have something for everyone. View all posts by Dreamspinner Press